Over the past four years, Amazon has uncorked a gusher of cash by driving up advertising on its Marketplace. Ad revenues are up from $1.7 billion in 2015 to $14 billion in 2019, and to a staggering $8 billion in the fourth quarter of 2020 alone – up 66% in a single year. This is oil boom territory, and Amazon advertising revenues have grown fast enough to make a noticeable dent in the Google-Facebook duopoly, accounting for more than 10% of digital ad sales in the US for the first time. Digital ads are the oil of the digital economy, and Amazon is clearly positioned right over a gusher.  But that’s not entirely beneficial – to sellers, to customers, or even to Amazon itself. That boom was inevitable once Amazon unleashed ads on the Marketplace platform. Amazon’s ads intervene t exactly the moment when a customer is seeking to buy an item, and they are tuned to the specific needs of that individual – Amazon aims for a market segment of one. That timing and tuning means that Amazon ads are extremely effective – sellers say that they offer far better return on investment than similar ads on Google or Facebook, for fairly obvious reasons.

But sellers advertise on Amazon for a different reason as well: because they have to. Once advertising became even semi-popular, it quickly became necessary. Sellers who didn’t advertise found they lost control of the Buy Box and were then quickly banished to the wilderness of page 2 or beyond in search results. Feedvisor estimates that 73% of Marketplace sellers advertise on Amazon. So Amazon is now stuffing search pages full of “sponsored” result – i.e. advertising. Here’s a simple example: four of the 7 items “above the fold” are sponsored. For a basic HDMI computer cable, three out of four are sponsored, and the remaining visible item is an Amazon house brand (and sellers of course face further competition from house brands, which may receive favorable placement as well). 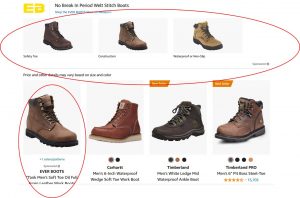 From Amazon’s perspective, this is almost all gravy. My calculations (in Behemoth, Amazon Rising) estimate Amazon’s margin on ads at 81%. And as sellers become desperate to attract attention, Amazon can even successfully invite big brands to pay $250-500k annually for premium advertising tools.

Great for Amazon, but not so great for sellers. Amazon charges a 15% commission on most sales categories, which sellers have long accepted as a reasonable price to play on the platform. But now, Amazon advertising costs average 7.5% of gross sales (as of 2019), which means that sellers have seen their fees to Amazon rise from 15% to 22.5%. Those extra payments come straight off the top from sales, a massive added burden – especially during a period in which Amazon has steadily squeezed sellers to use Fulfillment by Amazon (a column for another day). For those who do use FBA, Amazon is taking well north of 40% of gross sales.

But what about customers?

Here Amazon risks losing its gold-plated reputation is the place to find product that best matches your need. Instead, customers increasingly have to wade through layers of paid-for content. Rather than a souped-up and massively expanded Sears catalog withal kinds of customer-friendly features, Amazon is offering those envelopes that stuff your mailbox with direct mail flyers that you don’t want or need.

So far, customers haven’t blinked much. Shopify is gaining traction, but that’s a slightly different story for another day. Customers are still loyal to Amazon, but the current advertising spree clearly risks taking them for granted. Amazon’s customer obsession and excellent technology used to mean that it offered its customers the items that best matched their search needs – but now it increasingly means those that paid the most for placement.

Amazon’s push into advertising may have been triggered by the need to pay for growing pools of red ink in its own retail operations. If that red ink recedes, Amazon may ease up on the gas pedal in advertising. Unfortunately for sellers, that won’t make much difference. Once advertising is possible on the Marketplace, it becomes mandatory. Fewer ads just means that they will become more expensive. According to Pacvue, the cost per click of advertising on Amazon was up 23% on Prime Day in 2020.  The overwhelming need to advertise will grow demand, while any Amazon reduction in inventory – perhaps following customer push-back – will accelerate competition for the best slots, further driving up the per click price.

So sellers had better prepare for further growth in their ad budgets on Amazon. The squeeze on seller margins will get worse, and aggregators like Thrasio may find more pickings among brands that an no longer stand the heat.

Amazon is riding the boom so far, but like all big waves, there are risks: sellers could become more disenchanted  and alternatives to Amazon might may emerge; and customers may become fed up with ads. We’ll see whether Amazon can continue to surf as the wave nears the rocks.