END_OF_DOCUMENT_TOKEN_TO_BE_REPLACED

Amazon’s new neighborhood wifi network (called Sidewalk) launched this week. It’s been castigated as  threat to users by privacy hawks, and hailed by Amazon as an inexpensive way to extend security services out to the the edge of a property and even beyond.

In a new article for CEO World, I argue that the immediate impacts will be less troubling than critics fear, and less effective than Amazon hopes. But the long term value of building an entirely new and potentially ubiquitous global network without laying an inch of fiber or investing in any edge devices is enormous, and I expect Amazon to fully exploit this opportunity.

If you are in a business segment with significant revenues, Amazon is coming for you sooner or later. That’s the truth behind Jeff Bezos’s famous statement: “your margin in my opportunity.” Even long-time B2B winners like Rockwell must face that new reality.

But all is not lost. In an oped for the Milwaukee Journal Sentinel, I show how it’s possible to learn from Amazon to defend existing businesses in ways that Amazon cannot match.

The Marketplace Gold Rush is on! According to Marketplace Pulse, $4 billion has now been raised in private finds to purchase companies that have built successful products on the Amazon Marketplace. That’s a staggering amount for what businesses that could quickly dissolve in the face of new competitors or indeed Amazon’s own entry into a product category. 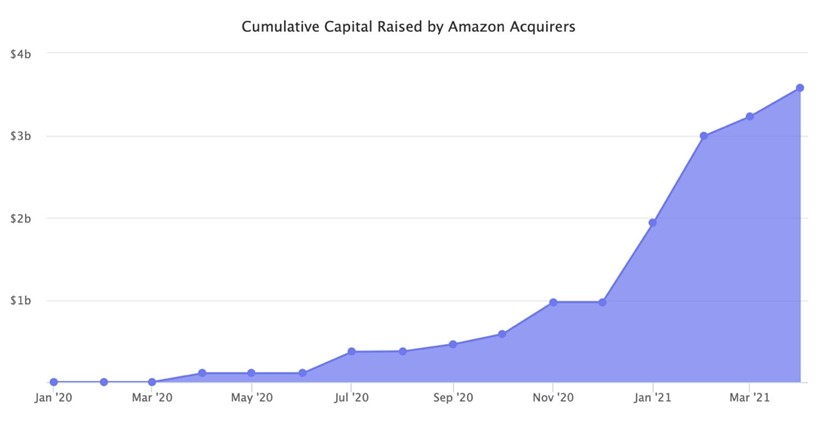 These figures do however say, loud and clear, that there is money – lots of money – to be made on the Amazon Marketplace. END_OF_DOCUMENT_TOKEN_TO_BE_REPLACED

Amazon got  a lot of positive buzz for its Amazon Technical Academy announcement. But before we all start leaping up and down, let’s unpack the announcement.

If Amazon told us actual numbers of enrollees and graduates, I’d be happy to applaud. In the meantime, I’ll hold my fire, and suggest that this is a lot of PR over not much yet.

The recent unionization campaign at the Bessemer Alabama  warehouse has generated tremendous pushback from Amazon – tons of propaganda inside and outside the warehouse, efforts to eliminate voting by mail, even getting the Post office to add a postbox in the parking lot. And of course hiring well-known union busters to work on its behalf.

I’ve written elsewhere that even if the union wins in Bessemer, it’s a very long road, involving years of trench warfare, to unionize the rest of the warehouses. I hope the unions are successful in the long march toward a unionized Amazon, although for many reasons I don’t think they will be.

But there is one point I want to add. Amazon claims that “Our employees know the truth—starting wages of $15 or more, health care from day one, and a safe and inclusive workplace.” It does pay relatively well, and fulltime workers get health care benefits immediately (the much touted 401k and education benefits are more of a mixed bag). A spokesperson notes that it was the second best company in the world to work for, according to a Forbes (survey though that presumably mixes white- and blue-collar workers, and the methodology is a bit shaky anyway). It claims its warehouses are a great place to work.

Amazon already knows all these numbers. If they were good, if they bolstered Amazon’s case, I have no doubt that Amazon would distribute them far and wide. But it doesn’t do that, so we can’t answer any of those questions. We do know that in 2017-2018 Amazon fired 684 out of about 2,000 workers at a Baltimore warehouse (revealed thanks to filing in a lawsuit). No doubt many more workers left voluntarily during the year, given the massive physical demands of the workplace.

So if Amazon really wants to convince us that its warehouses are a great place to work, it can easily do so: just provide the data. We can connect the dots. The fact that Amazon won’t do so is very strong evidence that its claims are more PR than physical reality.

Over to you, Amazon.

For 100 years, retailers have segmented the broad marketplace into groups – soccer moms, or Millennials, or New Yorkers, or readers…  pretty much every retailer uses target segments like those.  But Amazon has never been interested. Instead, it wants a segment of one: you. It gathers information about what you look at, what you buy, your browsing habits. To that it adds information from your purchases – address and credit cards on file – as well as your Amazon address book to find those close to you. It is also the second biggest tracker on the web, after Google, so it follows your activity far beyond the Amazon ecosystem. And it can access the standard sets of information that can easily be sucked in from outside: your credit score, your home ownership, criminal complaints and records…. Amazon  probably knows more about you than any other entity on the planet, including your mother and your spouse. and now, it’s moving into healthcare. END_OF_DOCUMENT_TOKEN_TO_BE_REPLACED

Amazon’s recent 10k filing allows an update to the analysis published in Behemoth, Amazon Rising. Unsurprisingly, as we know, revenues boomed during the pandemic, and that was true for all segments except physical stores. However, trends that existed pre-pandemic have accelerated: Amazon’s first party retail operations lost a staggering $42 billion in 2020, red ink that was covered by the explosive growth of profits in other segments: 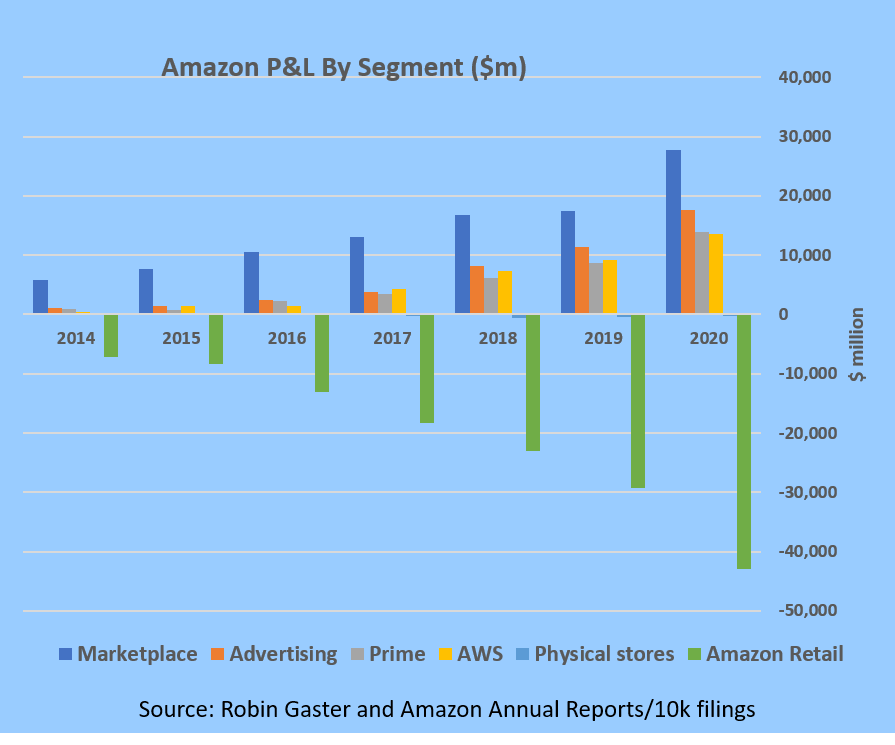 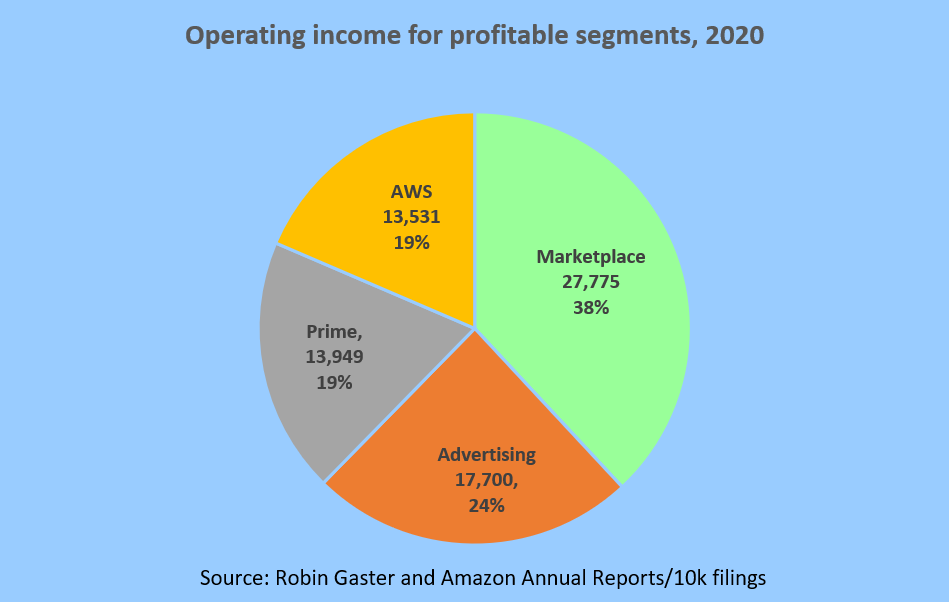 This helps to explain why Amazon has been squeezing sellers, pushing Prime internationally in particular, and above all turning Amazon.com into a giant ad.

This post uses the most recent Amazon 10k filing to update the detailed analysis (including a full description of my methodology) in Behemoth, Chapter 9. 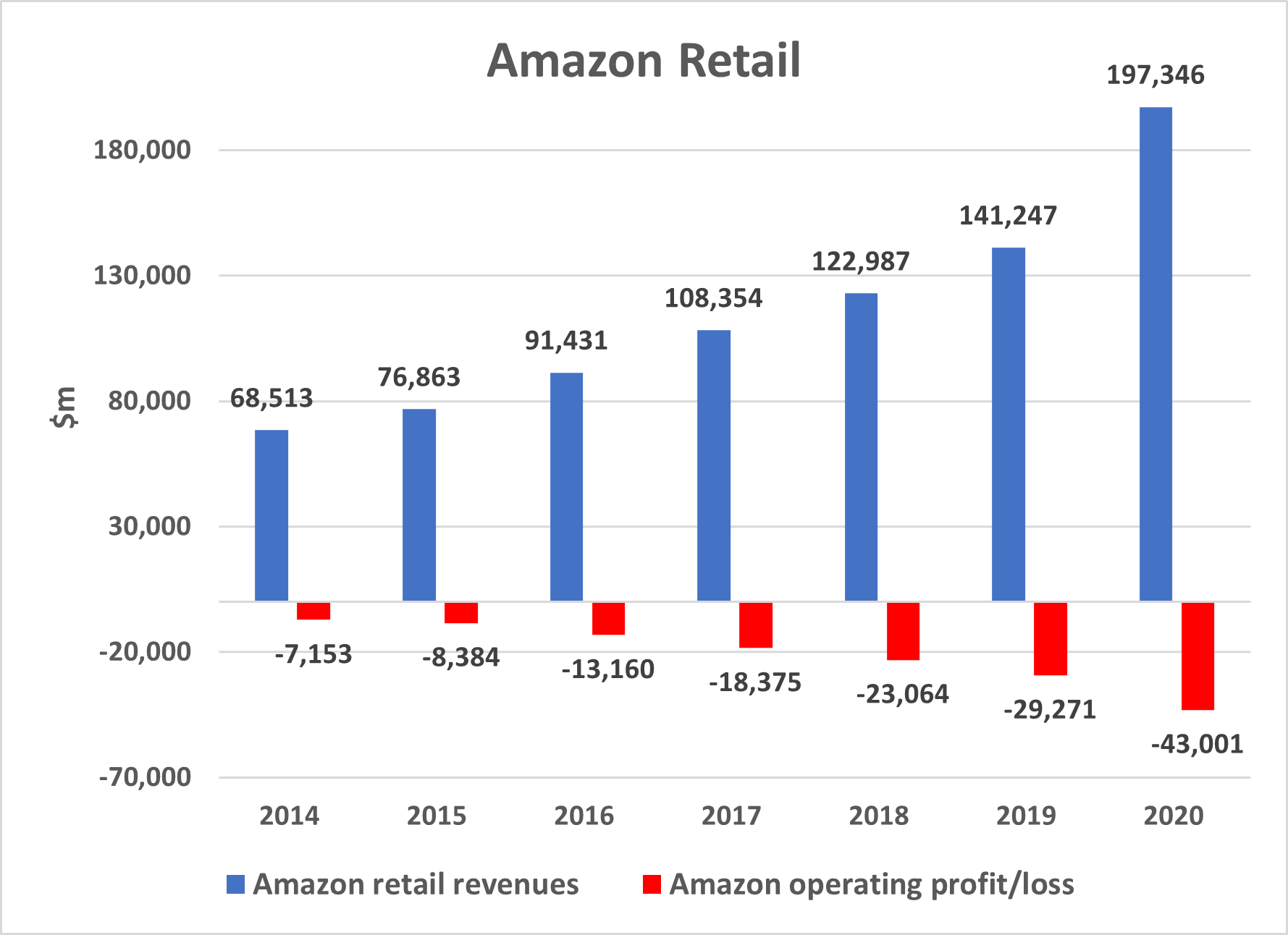 Just a note to say that my book Behemoth, Amazon Rising: Power and Seduction in the Age of Amazon has been released in paperback and as an ebook. I hope you’ll give it a look, and if you buy it, do make sure to leave reviews at Amazon and/or Goodreads (the modern currency of the book world). It’s available at most bookstores and of course Amazon. You can find more links on my book page.

I’m doing a launch event as a roundtable at GWU with three other experts on Amazon at 12pm on Wednesday March 3rd. I’ll be speaking around 12,30 if you have limited time. Details here. To register, just send an email to gwipp@nullgwu.edu. They will send you the zoom link. The other speakers at least are very knowledgeable and entertaining.

Behemoth has had some initially favorable press, and I hope you can help spread the word, as I’m looking for more opportunities to reach out. Anyway, happy to talk more about it and to connect more generally – I’m now emerging from the long dark tunnel of authorship… 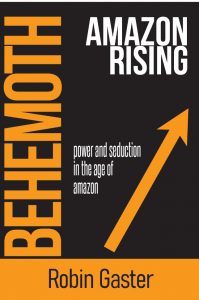