Jay Greene just posted a well-researched piece on Amazon logistics in the Washington Post. Lots of good stuff that I plan to use. But a central theme of the article is that Amazon is positioning itself as a competitor for FedEx/UPS/USPS. I don’t think that’s correct.

Amazon doesn’t want to be the next FedEx. Critically, Amazon will for a long time be delivering primarily for itself. it’s retail platform sales in a normal non-COVID year have been growing at >25%, so it needs that much increased capacity to just keep up. That growth will accelerate further as ecommerce moves into the acceleration phase of the adoption S-curve. And scaling in the real world is a LOT harder than scaling digitally.  As of October 2020, Amazon had 234m square feet in its distribution network, while Walmart and Sam’s Club combined had 143 million. In 2020, added 50% to its base to keep up with the COVID-19 demand shock. At Amazon’s current rate of growth, in 2025 alone it will need to add logistics space equal to Walmart’s total current warehouse and delivery space.

Amazon is also thickening its network, and plans to add 1,000-1,500 small hubs in the next few years as well. Plus there are plenty of other logistics initiatives – drones, DSPs, lockers, Kohn’s, garage delivery… it’s a long list.

The recent push into online groceries – massively fueled by the pandemic – means that even more of Amazon’s logistics efforts are diverted in other directions. Logistics for groceries is very challenging, and Amazon is only just getting started there.

Amazon also needs to cut logistics costs per unit, not grow them. These costs have been rising steadily for at least 6 years, partly because Amazon keeps doubling down on delivery speed. 2-day delivery became 1-day and then same-day for many items. that costs money – Amazon said it’s shift to 1-day in late 2019 cost $800 million, but those costs don’t end when the quarter closes-  it’s still spending more money on faster delivery. 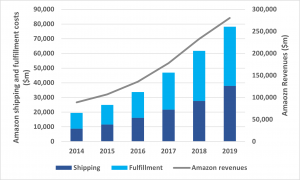 Bringing deliveries in-house is one option, and Amazon has built tools to decide in real time how to automatically route every package flowing through the warehouse. It’s DSPs and Flex drivers  deliver the packages that are profitable to take inhouse. And only those. It’s also experimenting with deliveries for tightly clustered businesses (e.g. in LA), another way to potentially build a lucrative logistics business, an also with groceries deliveries in the UK. But only in some areas – LA’s a long way from households in rural North Dakota. A loooong way.  Cherry-picking is what Amazon does best, using its unmatched data capabilities. And that’s what it will do, picking and choosing where it wants to go head to head for outside business.  It doesn’t need routes that are marginally profitable or worse.

The only rational conclusion is that Amazon logistics has its hands more than full just meeting internal demand. It has neither the physical capacity nor the management focus to build out a full-fledged competitor to FedEx. Instead, it builds what to needs where it needs, like its Amazon Relay platform for supporting its long distance trucking operations. And the boom in ecommerce overall will be a blessing for UPS/FedEx/USSP once they figure out how to surf the wave, build capacity, and get their pricing right (especially for USPS).

A final note on capacity. Amazon is undoubtedly in better shape for the coming ecommerce wave than most – perhaps all – competitors because it’s been building its logistics network for this purpose for 20 years. It has also de-skilled work in the warehouses to the point that it can hire 400,000 people in a year and have them be productive. But it’s still not clear how well it will handle the enormous wave of demand that’s about to crash over the sector. Even Laird Hamilton  wipes out once in a while.