Register by email to gwipp@nullgwu.edu

Amazon’s extraordinary empire contains more than 120 million Prime members, 2 million retail sellers, 1.2 million employees in the US, and the biggest cloud computer company in the world. It has major interests in entertainment, publishing, retail, logistics, healthcare, B2B… the list seems endless, and consumers have benefited enormously from its innumerable innovations. Yet its single-minded pursuit of endless growth and self-described obsession with customers is badly unbalanced. Sellers, partners, and workers all know that Amazon’s footprint can be heavy, and is often highly destructive. The key question then, is how do we get the Amazon we want, rather than the Amazon we’ve got?

Behemoth, Amazon Rising speaks to many dimensions of that question, and in Amazon 360, Robin Gaster will explain Amazon’s innovation, its culture, and the need to go beyond antitrust. Mike Shatzkin will explain how Amazon rose to dominate the book business. Jason Boyce will underscore the dangers lurking on Amazon’s platform for independent sellers. Jesper Okkels will provide a European perspective, where Amazon is not – and may never be – dominant. 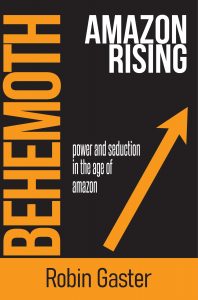 Dr. Robin Gaster is a leading expert on innovation and small business, and the author of Behemoth, Amazon Rising: Power and Seduction in the Age of amazon, which describes the rise of Amazon , its long-term strategy, and unique culture. He argus that antitrust will not be sufficient to turn the Amazon we have into the Amazon we want.

Mike Shatzin is Founder & CEO of The Idea Logical Company and has had a 50+ year-long career in the book publishing industry as a supply chain expert, digital change leader, strategic consultant, and as the author of nearly a dozen books. Oxford University Press recently published his latest book, “The Book Business: What Everyone Needs to Know,” co-authored with Robert P. Riger.

Jason Boyce is author of The Amazon Jungle and founder of Avenue7Media. He started selling direct to the consumer online in 2002, and as an Amazon Merchant in 2003. He bootstrapped several brands to success, as Jason’s company become a Top 200 Amazon Seller. In 2014, he began helping others succeed online, founding Avenue7Media, a 21st-century product marketing agency.

Jesper Okkels is foudner of Sasam, a European parcel box company serving Amazon and other ecommerce companies. He is also president of the Parcel Box Manufacturers Association, and his work reflects the rapid growth of lockers and other solutions to last mile logistics in Europe.

Each speaker will speak to a different dimension of Amazon for 10-15 minutes, plus a short Q&A. The event will conclude with a roundtable addressing questions from the moderator (Dr. Garry Young), other panelists, and the audience via the chat function.

Register in advance at gwipp@nullgwu.edu , and receive 30% off the Behemoth, Amazon Rising ebook, or a paperback signed by the author